We are a non-profit advocacy group that works to normalise religious dissent. We also educate Myanmar’s youth about atheism, scepticism, and humanism, and promote secularism, liberty, and anti-capitalism ideals (socialism & anarchism). 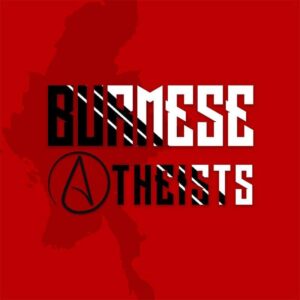 The earliest official record of atheism in Burma was since 1940s. Thakins (Burmese nationalists during the British colonial time) from Dobama Asiayone (We Burmans Association) were influenced by Marxism-Leninism consequently dialectical materialism.

Some of the Thakins have been influenced by the “League of Militant Atheists,” an anti-religious organisation from the Soviet Union that is directly controlled by the Bolshevik (Communist Party of the Soviet Union). The “League of Irreligious” was formally registered in Burma under the leadership of Thakin Thet Phay and Thakin Moe Aung.

Some Thakins, including Thakin Nu, the country’s first prime minister, said that Marxism was intolerant of religion since it denied the existence of God (God). Thakin Nu claimed that Buddhism had no creator. Thakin Nu asserted that Buddhism is an atheistic belief system.

Shin Ukkaha, a progressive buddhist monk with Marxist leanings who influenced Thakin Aung San (the father of the nation), posed a challenge to this narrative by bringing up mystical beings and supernatural entities inside Buddhist scriptures. In contrast to Traditional Burmese Theravada Buddhism, Shin Ukkaha modernised a rationalistic kind of Buddhism (like Dr. Ambedkar’s neobuddhism). Later, from his influenced groups, numerous freethinker and irreligious movements emerged.

In 21st century, the earliest international record of atheism in Burma is “Kyaw Moe Khine” whose nickname is Bart. He is an ex-Muslim who exposed the discrimination that most of the Myanmar Muslims face inside a Theravada Buddhism dominant country. Even though we have no connection with “Ko Kyaw Moe Khine”, such sort of outcast atheists meet with each other and a new idea was born.

Facebook groups and loosely connected progressive activists became organised and Burmese Atheists, was established. “Burmese Atheists” which could be written formally as “League of Burmese Atheists” is founded by some anarchists, social democrats, humanists and academics who are in favour of secularism in Myanmar.